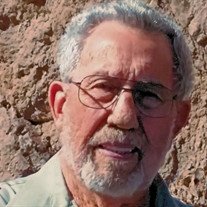 Mr. Bob Simpson, age 83 of Tazewell, TN passed away on Sunday, January 3, 2016 at home surrounded by his family. He was a devoted son, brother, husband, father, grandfather, great grandfather and friend. He was a member of the Seventh Day Christian Assembly of Knoxville, TN. He was born in Truman, Arkansas on June 23, 1932, to Gordon and Betty Simpson. He is preceded in death by his parents, wife of 28 years, Patsy Jean Simpson, one brother Jim Simpson and wife Faye, one sister, Vera Alene Lester and husband Eldon and Niece, Karen Hyde. Bob loved his careers. He was a truck driver for over 50 years, farmer, and pastor. He said that if you do what you love, you never have to work a day in your life and he lived that way. His love of life and people were reflected in his character, his words of encouragement, and his positive spirit. He was a great example of how to be a Godly and humble man. He simply desired the best for all those he loved and gave himself unselfishly to everyone in their time of need. He is survived by his children: Shane Simpson, wife Eula, Sheena Agee, husband Gene of Harrogate, TN, Richard Simpson of Las Vegas NV. Grandchildren, Robby Agee, wife Kishon of Kingsport, TN and Travis Simpson of Nashville, TN. Great Granddaughter's, Kara and Cailyn Gillis of Kingsport, TN. Graveside services will be conducted Thursday, January 7, 2016 at 1PM in the Irish Memorial Gardens Tazewell, TN with Pastor Ken Swiger and Elder David Truan officiating. Claiborne-Overholt Funeral Home is Honored to be serving the family.
To order memorial trees or send flowers to the family in memory of Bob G. Simpson, please visit our flower store.