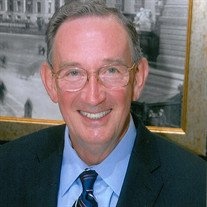 Charles Robert Harris, age 76, of New Tazewell, TN passed away peacefully surrounded by his loving family and friends on February 20, 2017 at Parkwest Medical Center in Knoxville. He was born on September 18, 1940 in Claiborne County and saved at an early age at New Salem Baptist Church. He was a lifelong member of the church and served as a Sunday school teacher and deacon. He was married to his beloved wife, Dovie Cunningham Harris, for 57 years and they had one son, Chris Harris of New Tazewell. In his twenties, Charles served in the United States Army as a medic. He attributed this experience to many life lessons that helped him to become the man he was today. After his discharge from the military, Charles began work at Signal Knitting Mills at an entry level position. His hard work ethic was noticed and as a result, he became supervisor of the entire knitting department. Eventually, Charles and Gary West decided to begin a side venture producing cloth for Signal that soon became known as Volunteer Knit Apparel. The business became very successful and as a result, the community, as well as many families and various churches reaped its benefits. Upon leaving Volunteer Knitting Apparel for retirement, Charles focused on supporting his church, family, and friends. He also loved his community and served on various boards in Claiborne County. Charles also enjoyed traveling and had friends across the world. He travelled frequently with the travel club of Commercial Bank. His favorite trips were to the Holy Land and Alaska. Charles also enjoyed farming, and he cherished giving friends and family produce from his garden. His most recent greatest joy was spending time with his beloved granddaughter, Savannah, who was his constant companion. Charles's success never changed who he was. At the end of his life, the three most important elements remained God, family and friends. He was preceded in death by his: Parents: Jim Harris and Glessie Edens Sister: Wanda Smart He is survived by his wife of 57 years, Dovie Cunningham Harris of New Tazewell, TN, his son, Christopher Charles Harris and wife, Melinda of New Tazewell, TN. Granddaughter: Savannah Catherine Harris. Sister: Faye Fultz Williams of New Tazewell, TN, Cleta Seal and husband David of New Tazewell, TN. Brother-in- Laws: William "Bill" Cunningham of Tazewell, TN, Alva Jr. Cunningham and wife Irene of New Tazewell, TN, and Steve Cunningham and wife Susan of Tazewell, TN. Sister-in-Law: Clara Morgan and husband Andy of New Tazewell, TN. Several nieces, nephews and a host of other loving relatives and friends. The family will receive friends Wednesday, February 22, 2017 from 5PM until 8PM at Claiborne-Overholt Funeral Home. Funeral services will be conducted Thursday, February 23, 2017 at 10AM in the Claiborne-Overholt Funeral Home Chapel with Pastor Steve Barnard and the Rev. Jerry Gray officiating. Music will be provided by Living Water. Interment will follow in the Fairview Cemetery. Pallbearers will be: Milton Bailey, Daryl Brooks, Jerry Brooks, Bob Edds, Larry Evans, Mike Reed, Tommy Runions, and Gary West. Honorary Pallbearers: Joe Smith, Delmus Turnmire, and Bob Walker. Claiborne-Overholt Funeral Home is honored to be serving the family.
To order memorial trees or send flowers to the family in memory of Charles Robert Harris, please visit our flower store.