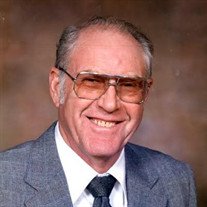 Claiborne - Overholt Funeral Home 1106 Hwy. 33 South New Tazewell, TN 37825 (423) 626 - 2191 Fax (423) 626 - 8440 Clyde Brooks took his journey to "a land where he'll never grow old" on Friday, August 1. He trusted God's "Amazing Grace" at the age of 11 and is now singing "How Great Thou Art" before His Heavenly Father! He passed from this life at Baptist Health from heart failure after receiving excellent and compassionate care from the doctors, nurses and techs on 4 North. Clyde was born on September 12, 1930 in Harrogate, Tennessee and lived most of his younger years in Lee County, Virginia. He moved to Springfield, Ohio in 1947. He served in the U S Army during 1951 & 1952 at Fort McClellan, Alabama before receiving an honorable discharge. He married the love of his life, Mary, on April 14, 1953 in Claiborne County Tennessee. Ordained at Springfield Missionary Baptist Church in Springfield, Ohio, he served there thirty years as deacon and song leader. He later continued to serve the Springfield community as deacon and song leader at Middle Urbana and Harmony Missionary Baptist Churches. Clyde and Mary moved to Mt. Washington, Kentucky, in August of 2012 to be near their only daughter. He was currently a member of Plum Creek Baptist Church in Taylorsville, Kentucky. Clyde retired from many years of service at Hoppes Builders in Springfield, Ohio. He enjoyed many years of bowling with Northridge retirees. He loved gardening, fishing, family time, and good food. He was a stickler for starting on time, so don't be late for supper! His true delight and greatest joy was serving his Lord. He loved attending and serving at church and most of all singing to the praise and glory of Christ his King. He felt truly blessed to have his wife at his side playing the piano in her beautiful style. Even when he could no longer sing, her playing was a joy and comfort to him. He was preceded in death by his parents, Oscar and Mary Brooks, his two brothers, Elmer and Homer and his two sisters, Ada Lee England and Betty Warf. He is survived by his wife of 61 years, Mary Ester Hurst Brooks, one daughter, Teresa Rohr (Jon), two granddaughters, Angel (John) and Aimee, three great-grandchildren, Kilee, Jon and Daniel, one niece and three nephews and a host a brothers and sisters in Christ, friends and extended family. The family will receive friends Tuesday, August 5, 2014 from 5PM till 8PM at the Claiborne-Overholt Funeral Home. Funeral services will be conducted 10AM Wednesday in the Claiborne-Overholt Funeral Home Chapel. Burial will follow in the Oak Grove Cemetery with Military Honors. Claiborne - Overholt Funeral Home is Honored to be serving the family www.claibornefuneralhome.com
To order memorial trees or send flowers to the family in memory of Clyde Brooks, please visit our flower store.