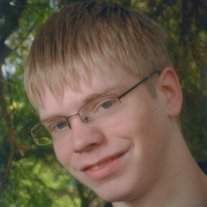 Claiborne - Overholt Funeral Home 1106 Hwy. 33 South New Tazewell, TN 37825 (423) 626 - 2191 Fax (423) 626 - 8440 Cory Dale Wilson Cory Dale Wilson was born September 14, 1993 to Roger D Wilson Jr. and Tammy Wilson. He is also survived by his brother "J.P." James Patrick Wilson. He was a member of Tazewell Baptist Church. He graduated from Claiborne County High School in 2012. He was accepted into ETSU in August 2013. Cory was saved at age 8 and rededicated his life to Christ at the age of 16. Cory was very active in band at C.H.S. He had many talents such as drawing, writing stories, learning foreign languages, and liked playing video games and hanging out with his friends. Cory's plans were to major in foreign language, graduate and move to Norway to help people. He often spoke of traveling to Russia or China to teach English. Cory had a deep love for people and music and always tried to help everyone he could. He is also survived by his maternal grandparents Joyce and Terry Phillips, paternal grandmother Joyce Arnold of Thorntown, IN, uncles Ron Wilson, Dennis Wilson, Jim Arnold, and Patrick Arnold of Indiana. Ron Oldham of Tazewell, TN and Michael Oldham of Colfax, IN. A host of cousins and many friends who he deeply loved and cared for deeply. The family will receive friends Wednesday May 15th from 5PM until 7PM at Claiborne-Overholt Funeral Home with funeral services to follow at 7PM in the Claiborne-Overholt Funeral Home Chapel with the Rev. Dustin Lakins officiating. In lieu of flowers, the family asks that donations be made to the funeral home to help with funeral expenses. Claiborne-Overholt Funeral Home In Charge of Arrangements www.claibornefuneralhome.com
To order memorial trees or send flowers to the family in memory of Cory Dale Wilson, please visit our flower store.