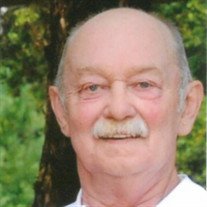 Mr. Dale A. Parker Sr. age 73 of Tazewell, TN was born June 5, 1942 and passed away January 25, 2016 at his home with his family by his side. He was saved at a later age in life. Dale was a veteran of the U.S. Army. He was preceded in death by his: Parents: Raymond and Imogene Parker He is survived by his: Loving wife of 44 years: Wanda Parker of Tazewell, TN Sons: Dale Parker Jr. and wife Kristi of Corryton, TN John R. Parker of Corryton, TN Grandchildren: Emma Parker of Corryton, TN Ethan Parker of Corryton, TN Brothers: Raymond Parker and wife Mary Lou of Concord, CA Archie Parker and wife Teresa of Royersford, PA Sister: Kaywon Kambas and husband Greg of Tecumseh, MI Several nieces, nephews and a host of other loving relatives and friends. The family will receive friends Thursday, January 28, 2016 from 6PM till 8PM at the Claiborne-Overholt Funeral Home. Funeral services will be conducted Friday, January 29, 2016 at 11AM in the Claiborne-Overholt Funeral Home Chapel with the Rev. Richard Nicely and the Rev. Dean Brantley officiating. Music will be provided by Mary Long, Marcy Williams, Loma Brooks and Linda Nicely. Burial will follow in the Parks Cemetery. Pallbearers: Todd Allen, Scottie Hensley, Chris Chittum, Bob Hensley, John Whitaker and David Earls Claiborne-Overholt Funeral Home is honored to be serving the family.
To order memorial trees or send flowers to the family in memory of Dale A. Parker, please visit our flower store.