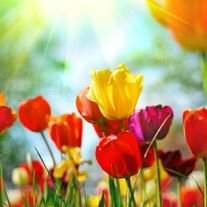 Mrs. Elizabeth James age 89 of Shelby Township, MI formerly of Tazewell, TN was born September 11, 1924 and went to be with the Lord April 3, 2014. She was the beloved wife for 63 years to the late Walter James. She's the loving mother of Bernadette (Mark) Winchester, John James, Eugene (Ginger) James, and the late Walter David James. Proud Grandmother of six grandchildren, eleven great grandchildren, and one great-great grandchild. She was a member of the Eastern Star, American Legion, and New Tazewell United Methodist Church. Mrs. James retired as a chef for the Ford Motor Company in Ypsilanti, MI. The family will receive friends Wednesday, April 9, 2014 from 5PM till 7PM at the Claiborne-Overholt Funeral Home. Eastern Star Funeral Services will be conducted at 7PM. Funeral services will be conducted 10AM Thursday in the Claiborne-Overholt Funeral Chapel with Dr. Ray Penn officiating. Eulogies will be provided by Phil Greer and Dr. Gary Burchett. Music will be provided by Janice Derreberry. Burial will follow in the Irish Memorial Gardens. Claiborne - Overholt Funeral Home is Honored to be serving the family www.claibornefuneralhome.com
To order memorial trees or send flowers to the family in memory of Elizabeth James, please visit our flower store.