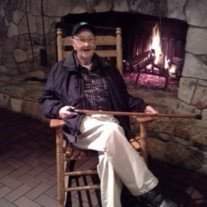 Mr. Howard Lynch age 89 of Tazewell, TN went home to be with Jesus on February 8, 2014. He was at his sister's home surrounded by his family when he lost his courageous battle to cancer. Howard was a Christian and member of Little Mulberry Baptist Church. He lived his entire life at his family farm and loved his home and special neighbors. He was preceded in death by his: Parents. William and Emma Lynch 5 Brothers 2 Sisters He is survived by his: Sister: Cleta Lynch Ferguson of Knoxville, TN Several nieces and nephews that he was very fond of. The family would like to express their gratitude to the members of Covenant Hospice, Sharon Ferguson, and Karen Sparks for all their loving care. Also his very special neighbors Boone Martin, Daniel Ramsey, Edith Mae Ramsey, as well as his close friends Connie and Danny Sexton and all of his Facebook Prayer Warriors. The family will receive friends Tuesday, February 11, 2014 from 5PM until 7PM with funeral services to follow at 7PM in the Claiborne-Overholt Funeral Home Chapel with the Rev. Danny Sexton officiating. Family and friends will meet Wednesday, February 12, 2014 at 9AM at Claiborne-Overholt Funeral Home and go in procession to the Pendleton Cemetery in Hancock County for interment. Claiborne - Overholt Funeral Home in charge of arrangements. www.claibornefuneralhome.com
To order memorial trees or send flowers to the family in memory of Howard Lynch, please visit our flower store.