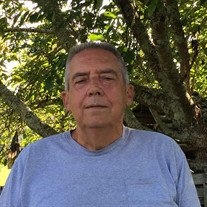 Kenneth "Lester" Treece age 71 of Cumberland Gap, Tennessee. He was born November 25, 1945 and passed away July 22, 2017. He was saved by the Grace of God at an early age and was a member of Red Hill Baptist Church. He was preceded in death by his parents: George and Ruby (Madon) Treece, Father-in-law Estel Chumley, Brother-in law Elmo Mayes. He is survived by his wife Joyce Treece. Daughters and Sons-in -law: Leslie and Greg Widner of Cumberland Gap, TN and Jennifer and Kevin West of Corryton, TN. Grandchildren: McKenna West, John Brogan and Karley Widner. Brothers and Sisters-in-law: Leon and Lois Treece and Lynn and Janet Treece. Mother-in-law: Reba Chumley. Sister-in-law: Helen Mayes. Brother and Sister-in-law: Eddie and Betty Chumley. Aunt: Ruth Hall Several Nieces and Nephews and a host of loving family and friends. The loves of his life and will to live were his grandchildren McKenna and John. Special Thanks to Julia Blocker for the continuous loving care she provided. The Family will receive friends Monday July 24, 2017 from 5pm-7pm with funeral services to follow at 7pm in the Claiborne-Overholt Chapel with the Rev. Gary Mundy officiating. Music by Mike Russell. Graveside services will be conducted at 11am Tuesday July 25, 2017 at the Rowland Cemetery, Cumberland Gap, TN. Pallbearers: Eddie Chumley, Gary Ely, Terry Treece, Steve Brogan, Andy Welch and Gary Hall. Claiborne-Overholt Funeral Home is honored to be serving the family.
To order memorial trees or send flowers to the family in memory of Kenneth Lester Treece, please visit our flower store.