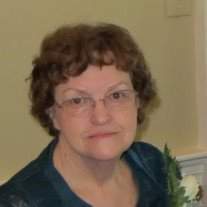 Mrs. Patsy Gean Simpson Mrs. Patsy Gean Simpson, age 68 of Tazewell, TN passed away on Wednesday, February 5, 2014. Pat was a devoted wife, mother, grandmother, and sister. She was a member of the Seventh Day Christian Assembly of Knoxville, TN. She was preceded in death by her parents JD and Delta Lindsey. She is survived by her husband Bob Simpson of Tazewell, TN Children: Richard Simpson and his son Ashton Michael Hallen of Kyles Ford, TN, Shane and wife Eula Simpson and their son Travis of Harrogate, TN Sheena and husband Gene Agee of Harrogate, TN, and their son Robby and wife Kishon Agee and their daughters Kara and Cailyn of Kingsport, TN Sister Verda Stallmaker of Harrisburg, AR. Graveside services will be conducted Sunday, February 9, 2014 at 2PM in the Irish Memorial Gardens in Tazewell, TN with the Pastor Ken Swiger officiating. Claiborne - Overholt Funeral Home in charge of arrangements. www.claibornefuneralhome.com
To order memorial trees or send flowers to the family in memory of Patsy Gean Simpson, please visit our flower store.