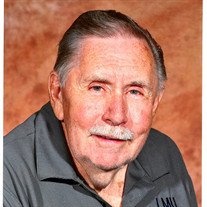 Mr. Phillip Wayne "Phil" Greer age 78 of New Tazewell was born September 5, 1939 and passed away March 5, 2018. He was a veteran of the U.S NAVY and a very faithful member of Midway Baptist Church. He served on the New Tazewell City Council as a member for 38 years. He also served as former mayor of New Tazewell. Phil was a very dedicated employee of Lincoln Memorial University where he served as director of Lincoln Memorial University Press. He was a very avid Kentucky Wildcat fan and race car enthusiast. He was preceded in death by his: Parents: Porter and Louise Snow Greer Lester Son: Brad Greer Brother: Richard Greer Second Father: Ira Glen Lester He is survived by his: Nieces: Terry Lemarr Kathy Asher And a host of cousins and other relatives and friends. There will be a visitation for family and friends Friday, March 9, 2018 at the Midway Baptist Church from 2 till 3 PM with a celebration of life to follow at 3PM with Pastor Ronnie Pressnell and Dr. Gary Burchett officiating. Music will be provided by Jamey Brown and the Midway Baptist Church Choir. Burial will follow in the Fairview Cemetery. Pallbearers: Bill McGaffee, David Daniels, Richard Owens, Andy Duncan, Mike Humfleet and Dan Burns Honorary Pallbearers: Bud Chadwell, Jack Enix, Don Surber, Doby Bunch, Travis Moody and Mayur Patel. Faculty and Staff of Lincoln Memorial Univeristy In lieu of flowers Phil wanted memorial contributions to be made to Brad Greer's Scholarship fund at Lincoln Memorial University. Claiborne-Overholt is honored to be serving the family.
To order memorial trees or send flowers to the family in memory of Phil Greer, please visit our flower store.