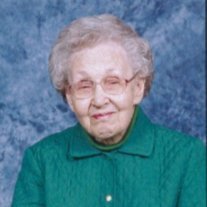 Mrs. Roberta Carr Mrs. Roberta Carr age 93 of New Tazewell, TN was born April 1, 1920 and went to be with her Lord and Savior on August 22, 2013. Mrs. Carr was a very faithful member of the First Baptist Church of New Tazewell. She graduated from Claiborne County High School at the age of 16. Roberta attended college at East Tennessee State for three years, and graduated from Lincoln Memorial University. She taught school for four years and then went to work at Citizens Bank remaining there for 28 years. She taught Secretarial classes for 10 years. Roberta married Fay "Major" Carr in 1943 and was married for 56 years until his death. She bought Enix and Carr Gifts in 1982 and continued to operate the store until her sickness no longer allowed. She was preceded in death by her: Her parents: M.C. and Mary Jane Russell Keck Husband: Fay L. 'Major" Carr Brothers: Fay G. Keck, Russell Keck, Curtis Keck, and Fred Keck Sisters: Cecil Carey, Lollas Robinett, and Lavetta Crawford She is survived by her: Sister: Rowena Barnes Cupp and husband Herman of New Tazewell, TN Several nieces, nephews, and a host of many other loving relatives and friends. The family will receive friends Saturday, August 24, 2013 from 6PM till 8PM at the Claiborne-Overholt Funeal Home. Funeral services will be conducted Sunday at 2PM in the Claiborne-Overholt Chapel with the Rev. Larry Sharp and Rev. Willie Newman officiating. Music will be provided by Vivian Buford and Todd Spangler. Pallbearers will be the Deacon's from First Baptist Church. Burial will follow in the Fairview Cemetery. Claiborne - Overholt Funeral Home in charge of arrangements. www.claibornefuneralhome.com
To order memorial trees or send flowers to the family in memory of Roberta Carr, please visit our flower store.