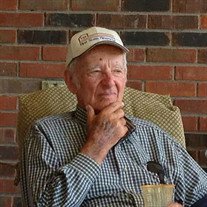 Roy George Fortner was born September 12, 1926 and moved to his heavenly home January 1, 2017. He was preceded in death by his parents Ike and Nettie (Keck) Fortner, brother Alvia Ford, and sister Lottie Killion. Roy is survived by his wife of 67 years, Coney Lynch Fortner, his daughters; Bridget and Jack Day and Portia and Randall Smith; grandchildren Mackenzie and Franklin Watkins, Whitney and Chad Lawson, Chandler and Paige Smith, and Corbett Smith; great grandchildren Delaney, Nate, Garrett, Shelby, and Hayden. Roy was saved in 1938 and was a member of Lily Grove Missionary Baptist Church for 78 years and served as trustee until his death. He began farming at the age of 12, after completing the 8th grade. He brought registered Hereford cattle to the farm as well as two horses for farm work. He supplemented his income by selling fertilizer and checking tobacco allotments for the ASCS office. In 1960 he became a substitute mail carrier for the United States Postal Service and became a full time carrier in 1968. During his work for the USPS he continued to farm full time with beef cattle and tobacco as his major crops. He served various farming organizations; Cattlemen's Association, Master Beef Association, Farmers Home Administration, Feeder Calf Association as well as being a on the board of the Claiborne County School Board and working with the Better Schools Program. After retirement from the postal system in 19¬¬95, he continued to raise beef cattle and a large garden. Roy loved his family and enjoyed spending time with them, especially his grandchildren. He was very fond of his neighbors and will be missed by many in the Lily Grove community. The family would like to extend a very special thank you to Amedisys Home Health and Hospice for all of their loving care. In lieu of flowers, please make donations to the Lily Grove Cemetery Fund, P.O. Box 163, Tazewell, TN 37879 The family will receive friends Tuesday, January 3, 2016 from 5PM until 7PM with funeral services to follow at 7PM in the Claiborne-Overholt Funeral Home Chapel with the Rev. Jack Day and the Rev. Eddie Overholt officiating. Music will be provided by John Mike. Graveside services will be conducted 10AM Wednesday in the Lily Grove Cemetery. Pallbearers: Michael Killion, Ian Ickes, Chandler Smith, Corbett Smith, Franklin Watkins, Chad Lawson Honorary Pallbearers: Great-Grandchildren, Nephews, Neighbors, Carl Keck, Clyde Atkins, T.C. Russell, John Mike, Bruce Killion, Tuble Loveday, Ray Fortner, Ferndee Fortner, Dewey Killion Claiborne-Overholt Funeral Home is honored to be serving the family.
To order memorial trees or send flowers to the family in memory of Roy Fortner, please visit our flower store.