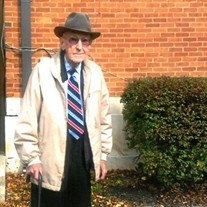 Claiborne - Overholt Funeral Home 1106 Hwy. 33 South New Tazewell, TN 37825 (423) 626 - 2191 Fax (423) 626 - 8440 Mr. Rudolph B. "Rudy" Clark, age 92 of Harrogate, TN passed away Wednesday, April 20, 2016 at the University of Tennessee Medical Center in Knoxville. He was born in Delton, VA and spent most of his life in Harrogate, TN. He came first as a student to LMU and later became the Librarian. He owned Clark Real Estate and Insurance Company until his retirement in 1992. Rudy was known to many as the "Harrogate Walker" with his 6'4" frame, his cane, and his trademark hat. He could often be seen walking in Harrogate or at the Middlesboro Mall. He is survived by his: Sisters: Olivia Clark Flowers of Baltimore, MD Astrid "Jackie" Davis of Hillsville, VA Cousin and boyhood friend: Hugh B. Clark of Pulaski, VA A host of nieces, nephews, cousins and other loving relatives and friends. There will be a gathering of family and friends on Friday, April 22, 2016 from 3PM until 5PM at Claiborne-Overholt Funeral Home. Graveside services will be conducted Saturday, April 23, 2016 at 11AM in the Moore Cemetery in the Delton community Pulaski, VA. In lieu of flowers donations may be made to: The Rudy Clark Endowed Library Fund at Lincoln Memorial University. Lincoln Memorial University Attn: University Advancement 6965 Cumberland Gap Parkway Harrogate, TN 37752 Claiborne-Overholt Funeral Home is honored to be serving the family.
To order memorial trees or send flowers to the family in memory of Rudolph Clark, please visit our flower store.