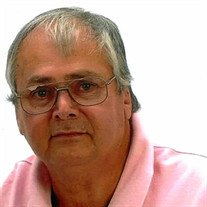 Stephen Randall Estep, born April 1958 lost the hard fight against heart and kidney disease. But he has gone from us to be with Christ. Steve's life should be summed up by more than just the list of people in it. He was a great basketball player and passed the love of that sport down to his sons, Anthony and Marcus. All his children are UK fans even though they live in Tennessee, except Anthony, who is a loyal VOL. He learned his trucking skill from his father, Ronald, and was good at that. Steve continued to work as a trucker most of his life. Steve enjoyed cooking and prided himself on everything he learned from his mother Josephine and then he taught his daughter Stephanie those recipes and even some he made up as he went. He also gave Stephanie his fighting spirit and determination. A trait she will be able to teach to her son Adam and daughter Isabella. Steve worked in the coal mining industry for several years. Now his son Justin has chosen that as his life's work, as well, and is sure to be a success at it. Anthony, Steve's firstborn, has more in common than just the physical similarity. Anthony too has a determination to succeed and a strong work ethic. Something he has taught his daughters Mahla and Alex. Both Steve and Anthony are strong in their faith and share their love for Christ. It's that love and faith that kept Steve going. Steve fought a very hard and difficult fight trying to get home to his wife Marinda that he loved dearly and his precious daughter Ava Jolene. The love for them and all his family gave him strength to get through some very difficult times. Sadly, the outcome wasn't what Steve or anyone hoped and prayed for. However, he will be remembered for the great fighting spirit he demonstrated through some very difficult days. While he was in the hospital for months, and throughout life in general, Steve touched so many people. That legacy will live forever even long after he is gone from us. Steve leaves behind his wife Marinda Helton Estep. He is also survived by his loving mother, Josephine Estep, but lost his father, Ronald Estep, in March of this year. Also left to mourn Steve's passing is his kind mother-in-law Dalene Helton Steve is survived by his 5 children Anthony Estep (Tonya) Stephanie Wright (Troy) Justin Lawson (Sarah) Marcus Estep Ava Jolene Estep 6 grandchildren Adam Estep, Mahla Estep, Alex Estep, Isabella Wright, Kaelyn Lyrock and MacKinnley Lawson Steve is also survived by his siblings Karen Williams (Greg) Joan Sheidler (Paul) Tracy Estep (Pam) Nieces - Tonya Welch, Rebecca Sheidler, Lindsay Estep and Paislee Parker Nephews - Curtis Sheidler, Brandon Widener and Tyler Parker Steve leaves behind many other relatives and friends, too many to list. He has family that have gone on before him - one child, his father Ronald, a brother Robert and all his grandparents. Steve loved the song "Spirit in the Sky". Now he has left us all to go be with Christ, the Spirit in the sky. The family will receive friends Monday, October 3, 2016 from 5PM till 7PM with funeral services to follow at 7PM in the Claiborne-Overholt Funeral Home Chapel with Brother Anthony Browning officiating. Graveside services will be conducted Tuesday, October 4, 2016 at 11AM in the Fairview Cemetery. Claiborne-Overholt Funeral Home is honored to be serving the family.
To order memorial trees or send flowers to the family in memory of Stephen R. Estep, please visit our flower store.